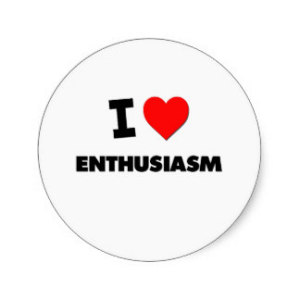 Those of you that know me will be aware that I am really enthusiastic about what it is that I do. Now, I admit that I’m lucky and I love my job, but you don’t have to be so far into what it is you are doing that you have disappeared into your own navel to transmit an air of enthusiasm about what you do. Enthusiasm is a driving force.

Last week, I attended a Rotary Club sponsored public speaking competition. No, I wasn’t competing. Given that I largely present ideas for a living, it wouldn’t have been fair to the rest of the contestants…who were 13 to 16 years old! It was part of a series of events called “Youth Speaks” wherein the Rotary Club provide an opportunity for young people to speak on any topic that bothers them in front of an audience. I was there because my son was part of his school team and never misses an opportunity to voice his opinion, somewhat like his dad, I think! If you ever get the chance to attend one of these events, then I recommend that you go as it is a very entertaining evening.

The subjects on which the various teams were speaking included, poor sportsmanship, suppression of competitiveness, the rise of reality television, the undesirability of the death penalty, etc. The reason for writing about the event here is not the topics covered, but more the enthusiasm with which the speakers, and their colleagues, presented their ideas. The individual speeches were only six minutes in length, but it was interesting to feel oneself being carried along on the stream of ideas presented. Now, given the format, there wasn’t an enormous amount of supporting evidence backing-up their various assertions, but that wasn’t what mattered. These young people were troubled enough about their topics to accept the terrifying opportunity to give voice to their concerns in front of an audience made up predominantly of strangers, and to do it with gusto.

Management is the same. No, really. Think about it. You must present ideas, ideally with supporting evidence, to an audience, and you must do this with enthusiasm! Why? Well, we’ve all attended lectures given by people who seem to be bored with what they are doing, and boy is it dull. You cannot manage a team of people if they are asleep. You cannot instil a feeling of excitement in your team if you are not excited yourself. Oh, you can present ideas alright, but doing so with all the drive of a wet paper bag is not going get the job done, is it?

Good managers lead with enthusiasm, set-a-fire under their teams and fan the flames of progress and success. Weak managers present ideas as if they are plonking last week’s cold leftovers on your plate and giving you the opportunity to eat it or go hungry! So, like the young people presenting at the “Youth Speaks” event last week, be enthusiastic when you manage. You’ll be surprised how much better the responses from your team will be, and how far your enthusiasm can carry you.