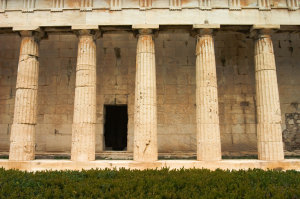 Since founding Flintloque in 2005, we’ve developed a number of learning tools to help organisations to implement a variety of management systems (e.g., quality, environmental, medical devices, business relationships, etc.), in accordance with International Standards.  One of our main learning tools is ‘The Five Pillars’ concept.  Now, obviously, the idea of having ‘Five Pillars’ as the foundation of a system of organisation has been around for over a thousand years, but Flintloque’s application of it to the implementation of management systems has proved extremely effective.  No company with which we have worked has ever failed to reach the Standard that it set out to achieve.

When aiming to implement a management system, half the battle is in the interpretation of the clauses within the Standard.  As International Standards are written to be applicable to the greatest number of organisations and markets, they tend to be written in a very reductive style; there is a lot of “you must have”, but very little, if any, “this is how”!  In addition, the order in which the clauses appear in the various Standards with which we deal (e.g., ISO 9001, ISO 13485, ISO 14001, BS 11000, etc.) is not the same as the order in which systems have to be implemented.

In order to alleviate these difficulties, we’ve analysed the Standards and determined which principles constitute their foundations.  These founding principles have then been consolidated into ‘Five Pillars’.  For example, when Flintloque is helping an organisation to implement a management system compliant with ISO 9001 and/or ISO 13485, we use the ‘The Five Pillars of Quality’ TM:

Similarly, for the implementation of a BS 11000 compliant relationship management system, we’ve devised ‘The Five Pillars of Collaboration’ TM:

2) Assessing and selecting your partner(s)

3) Developing the deal rather than (just) the contract

4) Delivering the value within the relationship

5) Maintaining governance and controlling the behaviours

The ‘Five Pillars’ concept allows Flintloque to guide organisations through many of the clauses within a Standard in a coherent manner and presents a framework around which the appropriate management system can be built.  Thus, we give the organisation a structure to work with rather than forcing them into a straightjacket that may stifle their creativity, innovation and growth.  If you find that your management system is doing the latter, then something is going wrong somewhere.  Get in touch and we’ll see how Flintloque can help.